Can Separation From Your Spouse Help Save Your Marriage 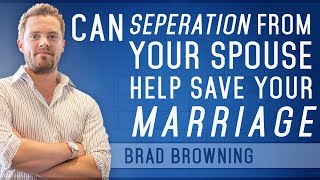 http://www.MarriageGuy.com/ — Can Separation From Your Spouse Help Save Your Marriage

Welcome, ladies and gentlemen, to my latest marriage-saving advice video. I am Brad Browning, a breakup and marriage coach from Canada…

Preventing divorces and healing broken marriages is one of my passions, and it’s also what I’ve been doing every day for 11 years or so. In this video, which I’m going to keep as brief as possible, I’ll answer one of the more interesting questions I’ve received from a client this week… “can separating from your spouse actually help you save your marriage?”.

It’s a great question indeed, and a controversial one among marriage counselors and therapists. Some experts and academics think separating can help a couple recognize what they’d lose if they were to get divorced, others think it’s an unproductive and dangerous waste of time.

First of all, I’d like to clarify one thing: it would, obviously, be ideal to avoid letting your marriage slip to the point where you’re considering separation, or even already separated and considering divorce, in the first place. But you knew that already, didn’t you?

So, aside from getting into Marty McFly’s Delorean time machine, you can’t undo the past. You’re stuck with a marriage in crisis. Your spouse suggests separation…. Or maybe you’re considering it…. Or you’re separated already even though you never wanted to be apart in the first place.

What does this mean for your chances at re-building a happy, lasting marriage? In my opinion, in many circumstances, a bit of time apart can be extremely helpful. Now, don’t put me in the “separation is helpful” camp just yet, because I don’t really feel that way in all situations…. But I do think that it can be a positive thing in some cases.

Why? Well, for starters, a marriage that’s falling apart is usually stuck in a negative feedback loop. In layman’s terms, you and your spouse keep doing the same things — things that are damaging your marriage in one way or another, whether your realize it or not — and until you break the cycle and get out of that rut, nothing is going to change. And an unhappy marriage needs to change, or it won’t survive.

So separation is obviously one way to break the cycle, at least temporarily. Let’s say, for example, your jealousy was a major cause of your spouse’s unhappiness in the marriage… you often became jealous, lashed out, created a toxic environment of mistrust, and that led to your spouse feeling chained down and frustrated.

Right, and taking a break from the negative cycle that you and your spouse have been trapped in can help. But it won’t help save your marriage in the long term if you pick right up where you left off immediately upon moving back in together… then you’ll soon find yourself in the same situation with all the same problems. So separation can help in the short term, but you need to make changes to break the cycle permanently if you want to solve things and remain happily married for years to come.

Another benefit to spending time apart? You can put an end to bickering, fights, and petty disputes that sometimes come to dominate day-to-day life. It’s hard for your wife to get mad about you failing to wash the dishes after dinner if there are no dirty dishes to wash…. And it’s hard to bicker over stupid little things, the way many couples do incessantly after years together, if you’re not actually together. That sort of thing may eventually make its way back into your marriage once you begin living together again, but a break from the day to day drama and conflicts can be a huge help that sometimes rejuvenates a relationship enough to get both spouses to put in more effort and make the marriage work.

If you struggle from that kind of bickering, petty arguments, and general hostility towards one another, I suggest you employ some of the simple techniques I describe in the full video on my website, MarriageGuy.com… watch to the end to learn a few super simple ways you can defuse or prevent those arguments, without needing to separate. Again, my dispute defusing tips are at www.MarriageGuy.com, so watch that video after this one is over.