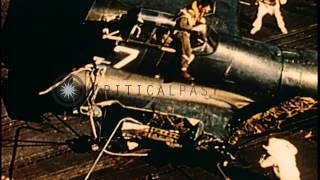 CriticalPast is an archive of historic footage. The vintage footage in this video has been uploaded for research purposes, and is presented in unedited form. Some viewers may find some scenes or audio in this archival material to be unsettling or distressing. CriticalPast makes this media available for researchers and documentarians, and does not endorse or condone any behavior or message, implied or explicit, that is seen or heard in this video.
Link to order this clip:
http://www.criticalpast.com/video/65675021567_USS-Yorktown_burial-at-sea_The-Fighting-lady_crippled-American-planes_pilots-scores
Historic Stock Footage Archival and Vintage Video Clips in HD.

Crippled planes attempt landings and crew pay homage to casualties aboard USS Yorktown during the Battle of the Philippines.

US Navy filming aboard ‘The Fighting Lady’, pseudonym for the USS Yorktown (CV-10) in the Pacific Theater during World War II. US aircraft return after an assault on the Imperial Japanese Naval fleet. Damaged and crippled planes make landing attempts on the flight deck. A dive bomber attempts a landing on one wheel, lands and falls over one side of the carrier into the water. Another plane lands and crashes. A US Navy crew member helps the US Navy pilot out of the burning plane. Crew members carry him away on a stretcher. Another crippled plane lands on the flight deck. Sailors put up the scores on a wall of the carrier including Japanese aircraft, ships and cruisers destroyed by the USS Yorktown crew. A pilot puts up his score on his plane, for the number of Japanese aircraft and Imperial Navy carriers hit. The crew collects on the flight deck for burial at sea. The deceased include Lieutenant Commanders and Lieutenants. Sailors give a gun salute and pay last respects to the US Navy sailors killed in action. ‘The Fighting Lady’ underway, and her carrier planes in flight. Location: Pacific Theater. Date: June 1944.

Visit us at www.CriticalPast.com:
57,000+ broadcast-quality historic clips for immediate download.
Fully digitized and searchable, the CriticalPast collection is one of the largest archival footage collections in the world. All clips are licensed royalty-free, worldwide, in perpetuity. CriticalPast offers immediate downloads of full-resolution HD and SD masters and full-resolution time-coded screeners, 24 hours a day, to serve the needs of broadcast news, TV, film, and publishing professionals worldwide. Still photo images extracted from the vintage footage are also available for immediate download. CriticalPast is your source for imagery of worldwide events, people, and B-roll spanning the 20th century.