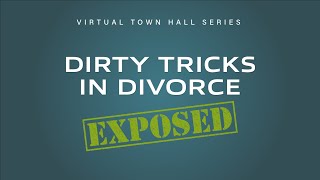 Cordell & Cordell’s virtual town hall from Thursday, September 17, 2020, explores some of the dirty tricks that are used throughout the divorce process.

Cordell & Cordell CEO/Managing, Executive Partner Scott Trout chats with a nationwide panel of divorce attorneys about their experiences and some of the most unsavory tactics they’ve seen employed. They also offer tips for guys going through divorce on how to protect themselves during their case.

Additionally, the panel answers viewers’ questions about the issues they are encountering during divorce.

If you are a man facing divorce, it is a good idea to get in touch with an attorney to ensure that your rights are protected.