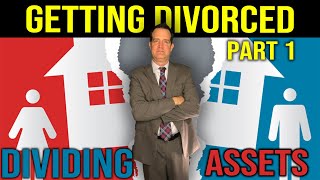 Today’s video is part 2 of my 3 part marriage series. We will talk about dividing marital assets and debts during a divorce as well as examples of trickier situations. Thanks for watching and don’t forget to subscribe for more episodes of Lawyer Up!
#divorce #assets #debts

Be sure to hit that subscribe button so you don’t miss another informative law related video! Keep in mind I am only giving out general legal knowledge as I am not your attorney. Remember to know your rights and always Lawyer Up!

Early success allowed Josh to become a partner at the firm that is now known as Roberts & Easley, LLC after only two short years. Over the years he has had several judgments, verdicts and settlements of six and seven figures too numerous to mention herein. Josh is a published author having numerous articles printed in nationally selling magazines. Josh also serves his community where he is an elder, deacon and plays bass guitar in the praise team at his church. Josh has been a frequent guest on the radio program LawTalk and is an officer and director of his local bar association. Josh also serves on the local school board.
​
His current practice areas include personal injury, real estate, business planning and litigation, contract, civil litigation, civil rights cases and felony criminal defense. Josh spends most of his time in federal court these days.