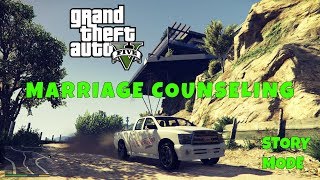 Michael comes home, calling for his wife Amanda. He steps out of the house and notices two tennis rackets, causing him to act suspiciously. He confronts Amanda when he walks to his room and he finds that she is cheating on him with her tennis coach, Kyle Chavis. Kyle attempts to reason with Michael, but he is too furious, so the coach jumps out of the window. Soon, Franklin arrives and helps Michael track down the tennis coach.

The two leave in a “borrowed” The Mighty Bush Bison and chase Kyle on the road, losing him briefly only to find his car outside of a nearby house. Michael threatens the tennis coach as he is hiding on the deck. Franklin then ties the truck’s cable wire winch onto the deck’s support beams. Michael and Franklin get inside the truck and Michael accelerates, causing the support beam to buckle and the entire house to collapse and slide down the cliff.

As they drive away, Kyle calls Michael on his cellphone and warns him that the mansion they destroyed wasn’t his, it was the home of a powerful gangster’s mistress, and tells Michael that he will send goons to kill them.

They manage to hold them off and make it back to Michael’s mansion, but are cornered by Martin Madrazo and his goons. Madrazo beats Michael with a baseball bat and demand that he should pay for the damages he has caused. With no choice, Michael proclaims his return to the life of crime.

Mission Objectives
Get in the truck.
Follow the tennis coach.
Drive to the canyon.
Pull down the house.
Go back to Michael’s house.
Lose Madrazo’s men.
Gold Medal Objectives
Not a Scratch – Complete with minimal damage to the Bison.
Driving carefully and try not to ram vehicles or take shortcuts.
Time – Complete within 05:30.
Skip the cutscenes.
Drive-by Killer – Kill 3 enemies whilst in a vehicle.
Kill enemies as Franklin during the chase. If you have them, use sticky bombs. You also can do it with Michael.
Tips
It is actually possible to complete this mission without having to have the gunfight with Martin’s men. This can be easily done by driving quickly enough to Michael’s house after the phone call ends and driving along the sidewalk to the house, as driving on the road will spawn the hitmen.
Aftermath

Lester Crest – Michael will automatically call Lester immediately after this mission.
Dr. Isiah Friedlander – Michael will automatically call Dr. Friedlander shortly after this mission.
Amanda De Santa – It is possible for Michael to call Amanda, where she is worried about if Kyle was killed.
Amanda De Santa – Michael can call Amanda who will ask him about Franklin. Michael will say that Franklin is his personal assistant to which Amanda calls him out on it saying Jimmy said that Franklin is a gangster. Michael gets angry and replies that “Jimmy says a lot of things” and that there was a misunderstanding that Jimmy was at fault for. He defends Franklin as a good kid and that he’s trying to help him out. Amanda tells Michael that it’s shady and she doesn’t like it which Michael replies that he doesn’t care if Amanda likes it before hanging up.
Jimmy De Santa – It is possible for Michael to call Jimmy, where Jimmy starts criticizing Michael for the way he lives and Jimmy feels ashamed about it.
Jimmy De Santa – At some other point, Michael can call Jimmy again where Jimmy has learned that Michael pulled Natalia’s house down in order to get Kyle and is upset as he and Kyle were friends but Michael tells Jimmy that he did it because Kyle was having sex with Amanda which leads to Jimmy’s disgust.
Jimmy De Santa – Franklin can call Jimmy after this mission. Jimmy will tell Franklin that they’re worried about Michael and wants to know how deep is he back in ’cause he’s acting not only “real weird” but also “vocal, violent, scary angry.” Franklin replies that Michael shouldn’t be out pulling scores but that he’s not meant to be sitting on the couch. Jimmy then asks Franklin not to get Michael killed before ending the conversation.

Like,comment and share this video to show your support!

Support me on patreon and win amazing prizes : https://www.patreon.com/yasuogotjuked