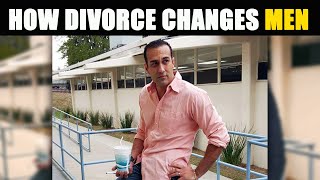 How Divorce Changes a Man | Moving on After Divorce | Life After Divorce for Men ” How to move on from a relationship takes a different view of the past 2 years as a single man. As a Divorce Coach, I’ve worked with hundreds of men who are at their end. This gives a viewpoint of what I would do if I could go back in time and tell myself about what to expect the next two years.

If you could turn back time and speak to yourself during the beginning stages of the divorce, what would you tell yourself? What pitfalls did you hit, what were some major wins, what would you do different? I’m Rene, your divorce and recovery coach and It’s been 2 years since my separation so I thought it appropriate to speak about one of the most tumultuous times men undergo,,,, your separation. But this story isn’t about me but rather our story and it’s one of triumph so let’s start revving that engine.

I’m Rene, a men’s divorce and recovery coach. If I could hold that broken man that was me 2 years ago,,,, alone, in silence, confused and feeling worthless I’d look at him smile and say in no uncertain term that I’m going to go through my biggest renesance and that all this pain, expensive as it is, was all worth it. I was scared, I was really scared but although I bruised, I did scar and that in a matter of weeks not months, I was going to find myself again. That I wasn’t only going to land on my feet but that I dodged a bullet and thrived but it was going to take losing the social circle I gained during those 7 years I was with my ex.