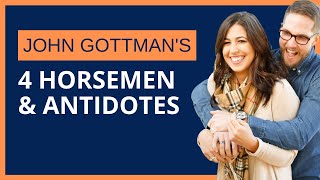 In this video I discuss Dr John Gottman’s Four Horsemen of the Apocalypse and their antidotes. The Four Horsemen of the Apocalypse is actually a metaphor depicting the end of times. Gottman use this metaphor to describe communication styles that can predict the end of a relationship. John Gottan is an American psychological researcher and therapist. He is known for his work on relationship analysis through scientific direct observations, many of which were published in peer-reviewed journals. Gottman can predict relationship failure with over 90% accuracy and has researched relationships for over 40 years.

If you’d like to work with me, or a member of the Lewis Psychology team, please click on the links below:

The first and most common horsemen is criticism. Being critical is often the expression of pent-up, unresolved anger. Criticism is different from a complaint. A complaint focusses a specific issue, but criticism is an attack on your partner’s personality or character. Criticism often starts with the word ‘You’. Criticisms also tend to be generalisations as you’ll frequently hear phrases such as “You never” or “You always”. Criticism can have devastating effects because it makes the victim feel attacked, rejected and hurt. The problem with criticism is that, when it becomes prevalent it actually opens the door for the other horsemen. The antidote for criticism is to use a soft or gentle start-up. Avoid using ‘you’ statements such as “you did …” which feel like an attack and indicate blame, and instead talk about your feelings using “I” statements and express what you need in a positive way.

When we communicate with contempt we we treat others with disrespect, call them names, throw insults and use body language such as eye-rolling and sneering. With this horsemen you’re basically throwing insults into the heart of your partners sense of self and when we communicate in this way the person on the receiving end is made to feel worthless. According to Gottman, contempt is the single greatest predictor of a relationship breakdown. He has even referred to contempt as sulphuric acid for love as its the most destructive of the four horsemen. The antidote to contempt is to build a culture of appreciation and respect in your relationship, and there are a few ways to do that such as expressing appreciation, gratitude, affection, and respect for your partner.

Stonewalling occurs when the listener withdraws from the interaction, they shut down and stop talking. Metaphorically they are building a wall between them and their partner. Stonewalling is a result of feeling physiologically flooded so when we stonewall, we’re not in a physiological state where we can discuss things rationally. The antidote to stonewalling is to practice physiological self-soothing, and the first step of self-soothing is to stop the discussion. Break for least twenty minutes because it will take that long before your body physiologically calms down. Spend your time doing something self-soothing such as listening to music, playing a video game, going for a small walk or reading. It doesn’t really matter what you do, as long as you find it soothing. 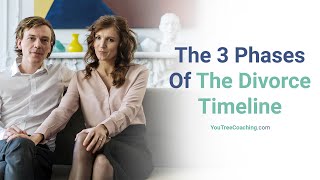 The 3 Phases Of The Divorce Timeline