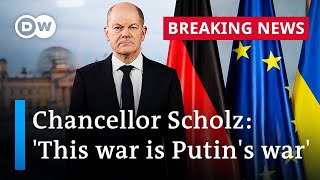 Chancellor Olaf Scholz appeared at the top of the hour in the 6 p.m. evening news in Germany, giving a short address in response to developments in Ukraine.

Scholz repeated his earlier comments in parliament when he had referred to the conflict as “Putin’s war.”

“He and not the Russian people decided on this war. He alone bears responsibility for it. This war is Putin’s war,” Scholz said.

Scholz said it was important to ensure that “conflict does not spread to other countries in Europe.” He warned the Russian leader not to underestimate NATO’s determination to protect its members, which do not include Ukraine.

The Social Democrat said that fresh sanctions were being prepared internationally to “make Putin pay a high price for the attack.”

EU leaders including Scholz are meeting on Thursday to discuss the issue, and are expected to announce new measures after their talks.

Russian President Vladimir Putin has “re-introduced war to the European continent,” the leaders of the G7 said in a joint statement following a virtual meeting on Thursday.

They strongly condemned Russia’s invasion of Ukraine saying it was “a serious threat to the rules-based international order, with ramifications well beyond Europe.”

They said Putin “put himself on the wrong side of history,” and called on Russia to “stop the bloodshed, to immediately de-escalate and to withdraw its forces from Ukraine.”

The Group of Seven industrialized nations plans to bring forward severe and coordinated economic and financial sanctions against Moscow.

The G7 leaders also said they were “closely monitoring” volatile oil and gas markets, and “stand ready to act as needed to address potential disruptions.”