THE ABSURDITY OF TEXAS DIVORCE LAWS 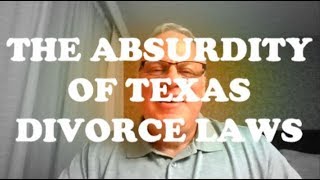 The absurdity of Texas divorce laws is illustrated by this case involving Paul Nixon, who may be convicted of a felony for filing fraudulent documents when he filed for divorce. Paul filed for divorce on February 15, 2019, and a judge declared that his marriage was legally dissolved in April. But a few problems existed.

1. He wife did not know he had filed for divorce and did not give her consent to divorce.
2. He forged his wife and others signatures on the papers he filed.
3. The judge accepted all the papers and Paul’s testimony, even though all were false.

As a result of THE WAY the divorce was filed, the judge has set aside the divorce ruling, and Paul is undivorced and married to his wife–but he faces up to 10 years in jail for forgery.

This case with Paul illustrates the absurdity of the divorce laws in Texas. His wife claimed that she had no knowledge of the divorce and “did not consent” to the divorce, but the reality is that divorces are decreed by judges every day against a spouse who does not consent.

Paul is going to be convicted for “aggravated forgery,” and possibly receive a prison penalty of up to 10 years. I am surprised that the state is concerned about “aggravated forgery” when “aggregated perjury” is a daily occurrence in divorce courts–and even though judges know that perjury occurs, they don’t prosecute it. Perjury is okay, but forgery is not okay? I don’t see the consistency of the law in these cases.

The judge decreed a divorce without adequate investigation into the facts of the marriage and reason for the divorce. This, too, is a daily occurrence in divorce proceedings, and seems to be permitted by the Texas (anti-) Family Code.

For example, the Texas (anti-) Family Code says this:

SUBTITLE C. DISSOLUTION OF MARRIAGE
CHAPTER 6. SUIT FOR DISSOLUTION OF MARRIAGE
SUBCHAPTER A. GROUNDS FOR DIVORCE AND DEFENSES
Sec. 6.001. INSUPPORTABILITY. On the petition of either party to a marriage, the court may grant a divorce without regard to fault if the marriage has become insupportable because of discord or conflict of personalities that destroys the legitimate ends of the marital relationship and prevents any reasonable expectation of reconciliation.

All that is needed is a PETITION for divorce, supported NOT by facts, but solely by the viewpoint or allegation of the petitioner. And even though 6.001 says that the court may grant a divorce, it ALWAYS DOES–100 percent of the time, with no exceptions. There is NO DEFENSE to the charge of insupportability, whatever that means. A person can lose his or her marriage, family, house, assets, future income, and daily care and custody of his or her children, solely based on an unsubstantiated allegation. What is worse is that many legislators, divorce attorneys, and organizations, such as the Texas (anti-) Family Law Foundation, a lobbying group, support such a practice and try to claim that is both constitutional, right, and just.

Finally, the judge vacated his decree of divorce. In other words, he undivorced them, and they are now married. Why? Because of THE WAY that the divorce was filed. Had Paul merely filed for divorce in the right way, he would have had his divorce, and his wife would not have been able to do anything about it!

Personally, I think the judge HAD to undivorce them to save face. They NEVER SHOULD HAVE BEEN DIVORCED TO BEGIN WITH. The wife lacked due process in the divorce lawsuit against her–again, something that happens every day in Texas–but this is so egregious that the judge has to do something lest he or she be held up to public ridicule.

We need to ABOLISH “insupportability” from the Texas (anti-) Family Code–or AT THE VERY LEAST, permit it ONLY WHEN THERE IS MUTUAL CONSENT. Yet when we tried to get this type of legislation passed this last session, the majority of members of the House Juvenile Justice and Family Issues Committee rejected this legislation and refused to allow it to be voted on.