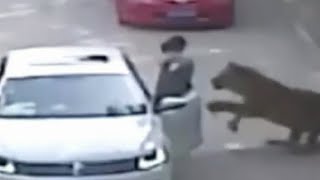 A tiger dragged a woman from her car at a wildlife park in China, and the woman’s mother died trying to save her.