What Happens If A Divorce Actually Goes To Trial 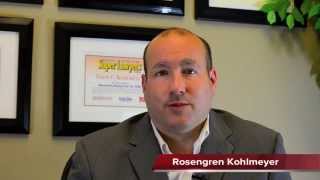 This question is answered by Jason Kohlmeyer, of Rosengren Kohlmeyer, Law Office Chartered, in Mankato Minnesota.

So… what happens if a divorce case actually goes to trial? It happens to be a question that gets asked much less frequently, and this probably has to do with the fact that it is a rare occurrence.

Family Law (Divorce) cases do not involve juries, you don’t even have the option to have a jury. The proceedings after that, as Jason indicates, are the petitioner, who is the person that initiated the divorce, will present evidence, possibly offer witnesses, whether they are family members, significant others, etc. about the assets involved in the divorce and how they want that to be divided up.

This is typically the time when a “custody evaluator” takes the stand and testifies as an expert witness, and following that the respondent gets their turn to go, and from then on the trial is no different from any other trial.

People are sworn in (it is a felony to perjure yourself or lie in court), it’s an open forum, there are cross-examinations, expert witnesses, and evidence for the case is presented much in the same way it would be in any other trial.

Two major differences are: a) the presiding judge does not make his “ruling” at the end of the divorce (although Jason does mention a one time case involving a retiring judge) and b) attorneys do not make closing arguments, instead they are given thirty days to write a proposed order, (what they want the judge to order) a memorandum of law is also submitted at this time (which is more of an argument for the judge).

After the trial, clients are looking at about ninety days before a judge will make their decision, and that’s something that doesn’t typically range, according to Jason.