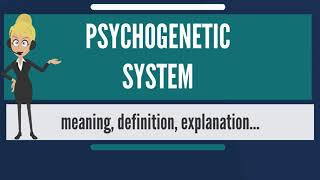 The Psychogenetic System is a collection of theories about how our romantic relationship styles are influenced by our observations in early childhood of our own parents’ relationship processes, as well as procedures for discovering, rewriting and adding to more mature perceptions and reactions in our present romantic relationships. Teachworth’s Psychogenetic System theories, which comprise a unique system of relationship counseling, were first developed in 1991 by Anne Teachworth, a Certified Gestalt Therapist, the Founder and Director of the Gestalt Institute of New Orleans since 1976. These theories and associated counseling techniques facilitate psychotherapeutic resolutions to a romantic couple’s relationship problems by mining their early childhood reactions to their own parents’ relationship shortcomings.

Teachworth first wrote about her “Psychogenetics” theory about relationship counseling in “Three Couples Transformed” which was published as a chapter in the book A Living Legacy of Fritz and Laura Perls: Contemporary Case Studies by Bud Feder and Ruth Ronall (1997). Anne’s counseling method for this is described in depth in her own book on the subject, Why We Pick The Mates We Do, first published in 1997; now its Seventh edition, revised in 2007.

Teachworth’s theories suggests that each of us, unconsciously, reinvent our early family pattern of belonging—no matter how dysfunctional—because it is the context of the strongest feelings of belonging.

Psychogenetics suggests that our later adult mate choosing is highly colored by an unconscious compulsion to find a suitable “playmate” to roleplay one of the two spousal roles assimilated in our early childhood, our “Inner Mate Model”, while we ourselves play the other identified role, referred to as our “Inner Adult Model”. As young adults we can become powerfully attracted unconsciously to someone who matches our “Inner Mate Model” regardless of whether they are a productive mate for us. We are drawn into “playing house” with a partner who will play one of the two roles, while we play the other.

Original to Psychogenetics is the observation, reported by multiple clients of Teachworth’s in her book, how in a sequence of marriages, the same adult can go back and forth between the spousal role their father or mother played with each other.

Psychogenetics offers much insight into the commonly observed pattern of the same man or woman, in multiple marriages, choosing “the same type of partner.” Psychogenetics modifies this to say: our unconscious is compelled to play either one of two spousal roles we naively learned in early childhood years, REGARDLESS OF WHETHER THESE ROLES FUNCTION WELL OR POORLY. As adults our unconscious is strongly influenced to utilize these TWO reference points to pick marriage partners.

Also original to Psychogenetics is the idea not only are “mommy’s and daddy’s” relationship style and habits imprinted on our unconscious; it’s also possible and observable to find elements of the spousal habits of ancestral family generations imprinted on an individual’s unconscious as well.